A Brief History of Everything - KEN WILBER 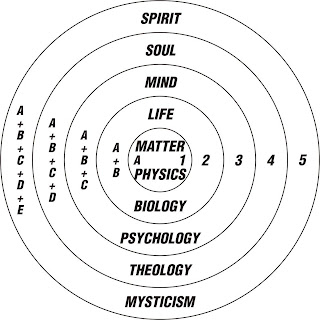 KEN WILBER at the age of 23 left his graduation in Biochemistry to pursue the wisdom of unraveling the mysteries. Excerpts from his book :

The point basically is everything created is a 'holon' of some sort or another.

Even the 'whole' KOSMOS is simply a part of the next moment's whole - indefinitely. At no point we have a whole, there are only whole/parts for ever and for ever.

It was Pythagoras who introduced the term KOSMOS. It contains

4. Theos - the theosphere or divine domains.

There are 'holons' in all the above spheres. Every 'holon' is a whole and a part. Every 'holon' has two twendencies or 'two drives' that is to maintain both its 'wholeness' and 'partness'

Maintaining its wholeness means it has to preserve its own identity, itw own autonomy, its own agency.

The self transcending drive produces life out of matter, the mind out of life and towards higher stages - the Spiritual stages.

The KOSMOS unfolds in quantum leaps of creative emergence.

Each 'holon' has four basic capacities : 1. Agency 2. Communion 3. Self dissolution 4. Self transcendence.

The Example of a thousand Monkeys and Shakespeare Play.

But the Universe is only twelve billion years old.

Calculations done by scientists from Fred Hoyle to F.B. Salisbury consistently showed that 12 billion years is not enough time to produce a single enzyme by chance. In other words, something other than chance is pushing the Universe.

SPIRIT is unfolding itself in each new transcendence, which it also enfolds into its own being at the new stage.