Mulkul Husain e ‘be Karbala till the day of Qiyamah was firmly established on the Day of Ashura . The tragedy of Karbala represented around the world the eternal struggle of truth against falsehood, justice against injustice and tyranny, human dignity against dehumanization.

The shahadat of Imam Husain (SA) on the banks of furat – Euphrates, the patch of land blessed from time immemorial by the kudoom mubarak of Ambiya kiram (SA) from Adam (SA) to our beloved RasulAllah (SA) and his vasi Moulana Ali (SA) the land known as Al- Ghadiriyah – Nainawa and as Syathi ‘ul Furat evolved as the land of ‘karb’ and ‘bala’ and in no time, KARBALA became the nodal point, from which radiated the Universal love around the world. The triumph of TRUTH against falsehood ruled the minds of man and nations that came and those that will come, till the end of time.

Muulkul Husain which germinated in the azeem sacrifice on the day of Ashoora on the burning sands of Karbala, with the passage of each century, managed to wipe off all political, cultural and social boundaries. The nida of YA HUSAIN is same around the world, the understanding and the lessons learnt from the azeem sacrifice is the same around the world, however, depending upon different cultural and social parameters , the expression of the grief is varied, but from Japan in the far East to America in the West – mulkul Husain holds sway over the minds of man.

The sacrifice is a testament to the greatness of the human station, that the angels were made to acknowledge by Allah at the time first creation.

While doing taffakur on the subject I came across a very interesting article I had read in my college days, and had written it down in my diary. As I referred to it again, it helped me in understanding more fully the concept of mulkul Husain. I share with my young friends - the facts will amaze you and help in reinforcing your understanding that, how the Tragedy of Karbala has infused the entire world and by this shahadat, the mulkul Husain for ever will remain triumphant.

What ALLAH wills no human mind can comprehend. Glory to HIM and HIS creation !

In a very small area covered by the TRIANGLE as depicted in the herein below graphic, the entire climatic conditions of the world are found, is not that amazing. The Triangle has very deep cosmological meanings, but that is a totally different subject. On reading the article sited below you will be amazed and my purpose will be served,that how mulkul Husain has reached all corners of the world. 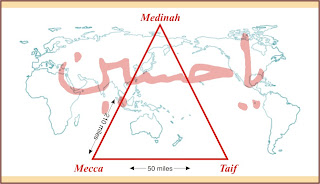 ( Excerpts from : Introduction to Islam by Muhammad Hamidullah – Centre Cultural Islamique – Paris)
‘ A perusal of the map of major hemisphere shows the Arabian Peninsula lying at the confluence of the three great continents of Asia, Africa and Europe. (The continents had once formed a single land mass before breaking apart and drifting due to plate tectonics - a scientifically proven fact)

In this limited area of Central Arabia, the existence of the triangle of Mecca – Ta’if- Medinah seemed something providential (like wise friends you can now understand that the land of “karb’ and ‘bala’ was predestined for the mulk of Husain to flourish and Imam Husain (SA) gave promise to Nana Nabi (SA) at a very young age, that he will give the azeem sacrifice :

Taif’s geographical and climatic features represented that of Europe Continent.

Medina’s geographical and climatic features represented that of Asian Continent.
This TRIANGE standing in the middle of the major hemisphere was, more than any other region of the earth , a miniature reproduction on the entire world.
AMAZING FACTS !
Likewise, from the parched desert land besides Furat, the azeem sacrifice of Imam Husain (SA) arose mulkul Husain. It continues to stir the consciousness of humanity. World leaders and icons of humanity have spread the message of Imam Husain (SA) to the far corners of the globe.
The three sides of the TRIANGE of mulkul Husain are :

Truth against falsehood
Humanity against villainy
Righteousness against evil

“Imam Husayn uprooted despotism forever till the Day of Resurrection. He watered the dry garden of freedom with the surging wave of his blood, and indeed he awakened the sleeping Muslim nation. Husayn weltered in blood and dust for the sake of truth. Verily he, therefore, became the bed-rock (foundation) of the Muslim creed; la ilaha illa Allah (There is no god but Allah).”—Sir Muhammad Iqbal

“I learned from Hussain how to be wronged and be a winner.” —Mahatma Gandhi

“The best lesson which we get from the tragedy of Karbala is that Hussain and his companions were the rigid believers of God. They illustrated that numerical superiority does not count when it comes to truth and falsehood. The victory of Hussain despite his minority marvels me! —Thomas Carlyle

“If Hussain fought to quench his worldly desires, then I do not understand why his sisters, wives and children accompanied him. It stands to reason therefore that he sacrificed purely for Islam.” —Charles Dickens

“In a distant age and climate, the tragic scene of the death of Husain will awaken the sympathy of the coldest reader.”—Edward Gibbon

Karbala stands for courage, self-sacrifice, integrity, honesty, vision, and bravery beyond words. It symbolizes all that is pure and true. Karbala teaches us that real battles are always fought in the minds and not on ground. Yazid was powerful and yet he lost the battle for truth.
Also, being in the majority need not necessarily make you right.

Battle For Truth
The battle of Karbala finds great similarity with the one at Badr – Islam’s first battle. It was the holy Prophet [PBUH] at Badr who fought with 313 die-hard supporters against a formidable army of some 1000 men. That day against all odds the small group won a decisive victory, and paved the way for a future Muslim empire. 56 years later it was his grandson with just 72 loyal men, who fought against an impossible opposition of several thousands to save Islam from the clutches of tyranny.

Karbala was a battle of truth against falsehood, humanity against villainy, righteousness against evil, justice against corruption. The much loved grandson of the Prophet [PBUH] stood in the scorching heat of Karbala along with his companions, devoid of water but determined. His loved ones, including his six month old son, fell martyr one after the other. In spite of this he repeatedly invited the other party towards righteousness and forbade them from evil and immorality, but it all fell on deaf ears. When the time arrived for him to march ahead all alone, he did it in a fashion which was reminiscent of his illustrious father Ali.
One of those who fought the battle of Karbala against him says, “I have never seen a person bereaved of his sons, men folk and his companions more Lion-hearted than him. The foot soldiers were scattering to his right and left like goats when a wolf come upon them.” —–Ibne Aseer, Tareekh Kamil

By paraphrasing the saying of Sufi mystic ‘ (Karbala )– you are not just a drop in the ocean (land mass of Karbala compared to the land mass of the world) you (Karbala) are also the mighty ocean in the drop.

Experiments at facilities like the Institute of Noetic Sciences in California and Princeton Engineering Anomalies Research Lab have proved that Mind rules over Matter – the spiritual belief in a ‘cosmic consciousness’ a vast coalescing of human intentions, that was actually capable of interacting with physical matter.
Inferring from this, it is no surprise than the land of ‘karb’ and ‘bala’ yjr mulkul Husain has for ever transformed the entire world.

The Shariat of Nabi (SA) was firmly established. The true meaning of Jihad, which has been maligned by vested interests around the world, is in fact derived from the Arabic trilateral verb - ja –ha –da , which means to strive, struggle and work hard. Imam Husain (SA) strove and succeeded in establishing truth against falsehood for ever, he struggled to fortify humanity against villainy for ever, and by his azeem shahadat , he established righteousness against evil, till the day of Qiyamah. These eternal noble traits form an integral part of mulkul Husain.

I hope I have managed to shed some light, share my insights on mulkul Husain

A very very well researched and thought provoking article that inspires as well as enlightens you.
Keep on going---------.Always awaiting for the next treat.

Ma'n qotela mazlooman wa Jaa'lna levaliyehi Sultana. We will raise his heir or heirs as sultan who is killed in his innocence without being proven for. This Quranic inscription engraved in Kufi script on one of the outer walls of Mazaar-e-Qutbi in Ahmedabad bears testimony to tyranny perpetrated on Imam Husain A.S. in Kerbala in 61 A.H. and on his rightful heir/representative by the sheer strength of his character the Dai Syedna Qutbuddin Shahid in Ahmedabad in 1056 A.H. referred to as "Brothers"( Ulaeka Ikhwani - also written on the outer walls of Mazaar at ahmedabad by Prophet Mohammed S.A. in his last performance of Haj. Upon being questione by one of his disciples who you are praying for he replied benignly: Antumul Ashaabi Wa ulaeka Ikhwani. You are my desciples and those are my brothers who will represent me by sheer strength of their faith in my mission -the Actual Mulk which shall last till the day of Qayamat. One of them shall embrace martyrdom in about 1000 A.H. bearing and braving all kinds of tyranny to be perpetrated in the same way as their Master Imam Husain had to who is in fact my grandson.The radiance of that staement is still dazzling in the countenance of our beloved Aqa Maula TUS Syedna Mohammed Burhanuddin who is the Malik-e-Mulkul Husain although he emphatically declares always and submit himself s the humble servant of Mulke Husain - who is the actual Master -Malik. He verily sums this up in his following couplets written by him recently: Maulaya inni Zakeroo,Fadhlaka Daa'ban shakeroo,Fima amarta Hazeroo, faa'mur faa'ntal ameroo,Abkika Maulayal Husain , Afdika Maulayal Husain, Maulaya Maulayal Husain( I always remeber you and i am always indebted to Fadhal granted to me, I am committed to carry out your orders. Order me because you are Orderer My master - Malik, I shall always cry for you as you sufferred for the Baqaa of this Mulkul Husain and I am pledged too by my life, O my Mater -Malik. May we be also pledged to whatis ordered by him. Mohammed rangoonwala

This one line manages to raise a cascade of emotions, and then in the very next line he addresses the Day and asks will you not have sacrificed ?

My Moula by expressing your inner most wishes and thoughts in this Marathiya, I feel you were very much there Moula and we are all witness that you are sacrificing your self on Imam Husain (SA) in myriad of ways each day, and may you continue to do so till eons. Ameen.

no words ,only tears in my eyes