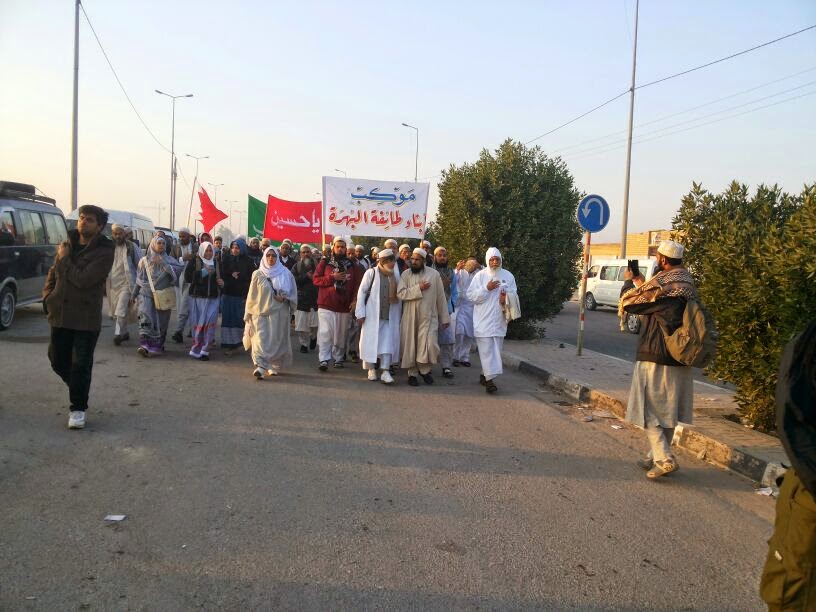 
This year once again my family received the sharaf of undertaking the most spiritually uplifting and soul enriching Arba'been journey from the most holy precincts of Najaf to Karbala. Each passing year the fervor and the number of pilgrims is for ever increasing.

In the year 62 AH ashab e Nabi (SA) Moulana Jabir in company of Attaya bin Saeed undertook the journey, which this year has witnessed a multitude of more than 20 million and more. ( Five times that of this year's Haj pilgrims ) Just thinking about it so overwhelming, and words fail to describe the feelings and outpouring of love, for those who undertake it.

My family was in company of 29 mumineen from Kuwait. At 7 am Sunday 6th Dec: 2014 we started from Najf Rubaat, in all 179 mumineen, a large many from India. We were escorted through the town carrying Husaini A'lam and Banners to the Highway by faiz  khidmatgujars, who took leave, when we reached the highway.

It was a moving sight when we reached Pole No : 1 on the highway and like a stream merging into an overflowing river, we in company of thousands chanting YA HUSAIN !YA HUSAIN ! started our momentos journey towards Karbala.

The Electricity Poles on the roads towards Karbala are the best markers. There are in all 1452 poles. The Karbala Rubaat is near Pole No: 1449. The haram of Abbas e Alambardar (SA) is near Pole 1452. Thus it gives an idea of the distance, and a means to understand the distance covered, and more important the 'marker' for assembly point of the group. We in our group decide before hand, on which number Pole should we assemble, so that those who walk ahead, wait at that particular Pole, for others who have fallen back. 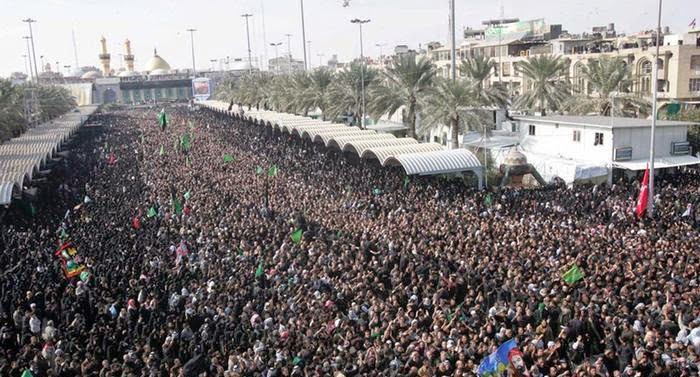 After the downfall of Saddam Hussain, in the Year 2003 the Arba'een which was banned for past 30 years was broadcast live. The Western Media in recent years has been reporting it as the World's largest and most dangerous gathering.
However, in spite of terrorist threats and intimidation, there is no sense of fear in those who undertake the pilgrimage. Sayeed Maldi Modarresi in his article in Huffington Post has in great detail, covered the different aspects of Arba'eeen. He talks of people undertaking a 425 miles of arduous journey from Basra to Karbala, walking for two weeks.

Feelings of affection, of reaching out and helping the pilgrims, showering them with doa for their safe journey is what one witnesses, as one remembering and moaning the Husaini kafla undertakes the journey. Mawakeb organizers who come from all walks of life, some of them are farmers and labourers, spare no efforts to make the pilgrims comfortable. It has only to be experienced. Fifty million meals a day financed by general public !! They line up the roads and at times literally plead with you to take their falafil and  chicken sandwiches, boiled eggs and bread, and fruits. Sharbat and tea is served in plenty at short distances along the road. The little ones came running towards us, pleading to take their offerings. 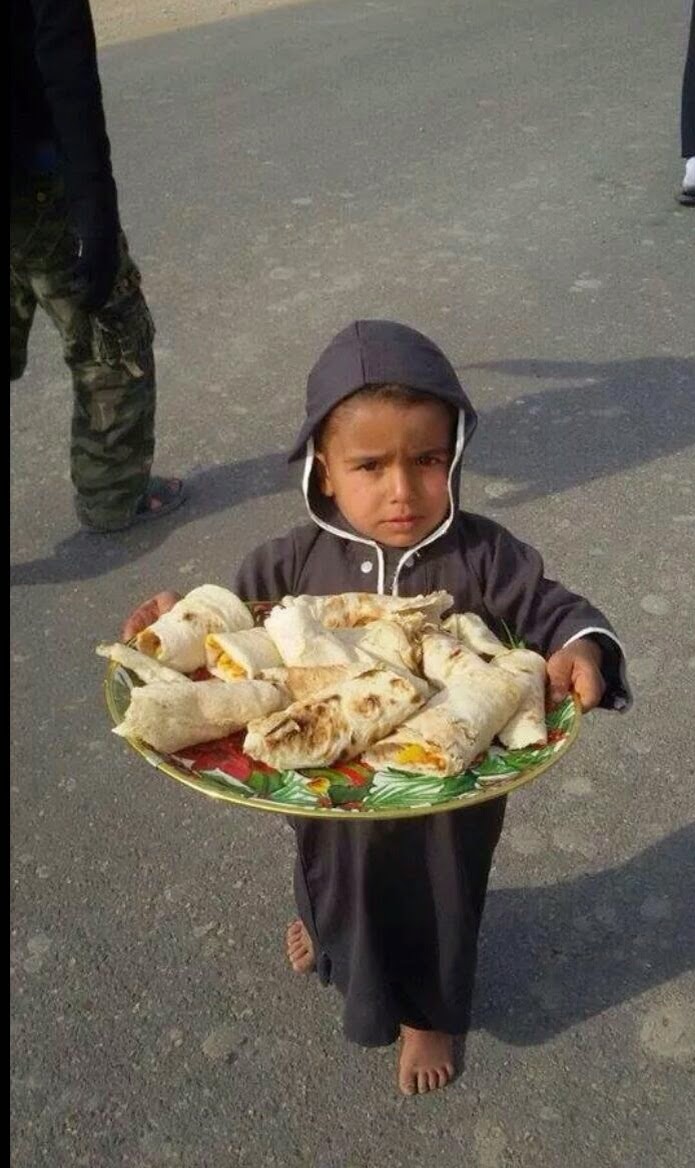 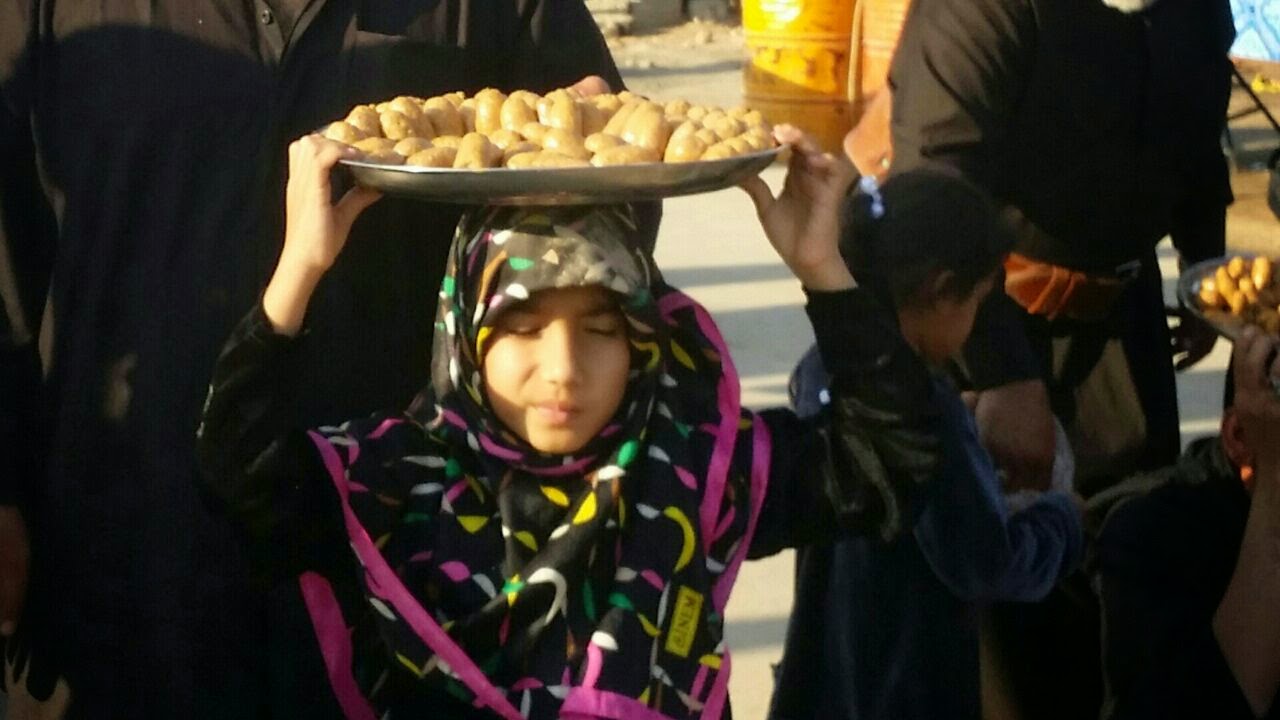 The love and fervor of the people is so overwhelming that tears gush forth, doa from the heart comes on our lips,  and it also takes us back to the road traversed in bondage by Imam Ali Zain ul Abedeen Moula and the Husaini kafla. As we walk towards Karbala, surrounded by so much outpouring of love and affection, we think of the pain and tribulations suffered in 61 A.H. 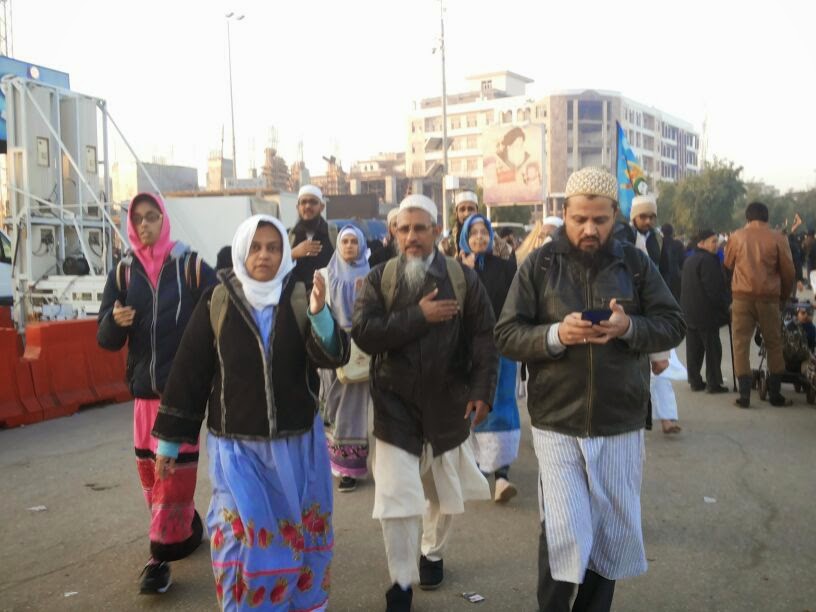 Our group of 179 which started from Pole No: 1 started to divide into smaller groups as we covered distance, the youngsters and able bodied walked faster, they rested for smaller durations.

One mumin youngster aged around 22 years walked the entire distance bare foot, just imagine walking on the cold road. Another mumin bhai, who has been coming for the past 2-3 years, undertakes the pilgrimage, fasting for the entire duration.

These are just two examples of many mumineen, who willingly undertake hardship and deprivation, all on account of the immense love of Ahle Bait (S.A ) and love and affection for Aqa Moula (TUS) and for his sehato a'fiyat and umre darazi.

Our group of 16 mumineen rested on the first night at a Farm House of a local Arab, and the hospitality received was overwhelming. The Amil Saheb of Bahrain who was in the early seventies, and Bhen Saheba who had only last year undergone knee surgery were in our group, and seeing them walk and keeping pace with us, was so motivating and uplifting. Unaided they walked with us, seeing them undertake this arduous journey I made a niyat and offered doa, that if Allah with his Mercy makes me reach that age, I will surely undertake this pilgrimage.

The second night was spent being fussed over by the locals in a  big well stocked tent, the ladies massaged our tiring limbs and went out of their way, to see that we were comfortable.  Finally on Monday, 8th Dec: 2014 at around 10.30 in the morning five of us reached Karbala, the rest in company of Amil Saheb and Bhen saheba reached at around noon.

On reaching Karbala I interacted with a bhen who was in a group from South India, and I learnt that they had started with the intention of covering the journey at faster pace,  and shortest possible time, as a result of which, they got so very tired, took different route, as a result of which a few of them, had to take a cab to complete the journey. An eye - opener.

I feel it is a spiritual pilgrimage and should be done with due reverence and feeling. Have just returned to Kuwait but looking forward to the next Arba'een and in the meantime wishing and praying for the tashreef awri of Aqa Moula A'li Qdr Muffadal Saifuddin Moula (TUS). There is so much of excitement and anticipation amongst  Kuwait muminen, and preparations are in  earnest.

NOTE: Above 'write up' is based on the narration given by Bhen Farida Mulla Shabbirbhai Basrai. Kuwait

It is not a travel of distance but a journey of ideas. A poet writes: "Kitna dilkash hai Bat'ha ka manzar dilnasheenhai dayar e payambar' ey 'Hasan" hamne jannat bhi dekhi haan magar Kerbala, kerbala hai". Ziyadanil Aswad in A'alamul Quds must be feeling very proud this day who had gone in the hazrat of Imam for qadambosi by undertaking a walk which had torn his feet because of which he had earned an admiration from Imam Jaffer us sadiq: "Haliddino Illal Hub". It is nothing but love of your Maula in your heart that will take you to Jannat. Mohammedi Saifuddin Rangoonwala

I would like to add to the Arbaeen journey, that its Aqa Maula's TUS. Doa mubarak and raza mubarak with tasbeeh of YA ALI, YA HUSSAIN AND YA ABBAS which takes us through to the end of the journey, where once you do the deedar mubarak of Haram shareef of Aqa Hussain S.A. the overwhelming feeling of accomplishment and the the Dua for Our beloved Maula tus. and that his children return back to qasre mubarak from the clutches of the ZAALIM gush forth with tears and maatam. This is the rooh of entire journey. Nobody is capable of even a single step let alone a wakathon of almost 90K.M. by a bunch of people who have never practised for it or exercied for it. Its only and only Aqa Maula's TUS. benediction. Wassalam. S. Basrai

Salams Asgarbhai.
Thanks for sharing the narrative on this year's Arba'een by a Kuwaiti mumena. It brought tears to my eyes. I was indeed overwhelmed.

I was in Najaf last December and met mumenin amongst them some of our colleagues from BGI who were preparing to undertake the Arba'een journey that year- I thought I could never do it and had no courage to convince myself of being able to undertake such a journey.But after reading the experience of this ben and especially the part where she mentions the 70 year Amilsaheb of Bahrain taking part- I felt ashamed of myself but at the same time got emboldened to partake in this journey inshallah next year if Allah Ta'ala grants me hayati and if Aqa Hussain AS accepts my niyat. Doa karjo.
Best Regards
Saifuddin M Faizullabhoy

I am indebted to Sk Saifuddin Faizuulabhoy, a dear friend of mine, who I admire for his self less dawat khidmat, for permitting me to publish his mail, so that many will be motivated.

Here I would like to share my personal experience in writing this article. It has to do with synchronicity - 'chance coincidences' . It so happens at on 12th Dec I get a long awaited wish fulfilment that Aqa Muffadal Saifuddin Moula will solemnise the Misaq of my grandson Moiz in Dubai.

My family is naturally elated, and as is my habit, I wanted to contribute in Hamd and Shukr a ' write up' on my blog. But sadly nothing was on my mind's radar, except fond hope.
However, on the same day Farida Basrai a relative of mine, posts three pictures of Ar'baeen and within a short period over Whatsapp shares short audio files, of her experiences and Voila ! a write up materialises.

I have seen in life that if your longing is true, the Universe out there makes it possible to realise your wishes. Your longing should be true, and your faith should be strong.

This journey is also done by Malak,Pak
And holy spirits or entities. We can invoke them for ease of our journey.