The special train comprising of 7 - 3 tier ordinary coaches attached with a pantry car, left Howrah Station at midnight Wednesday, and each coach displayed the specially prepared name charts of mumimeen.

After traveling in the sweltering heat of central India crossing the States of Bihar, Jharkahand, Orissa, Madhya Pradesh, Maharashtra, we finally reached Burhanpur at around 10.15 am Friday.

We traveled in the hottest spell in Met History, as reported in News Papers. Our city has been simmering since April 18th with mercury crossing 40 degrees, on all days and discomfort index of 64 degrees. The train journey took us through the sweeping hot dry spell of North and Central India.

On the day we left, there was a news report that 5 persons died on account of heat wave in and around Nagpur.

Did all these unnerving reports deter us from traveling in non air conditioned train ?
The figures speak for themselves. It was decided that the train journey will be feasible, if 300 persons opted to travel, and here we were 337 bracing the heat and the long journey, with chances of frequent en route delays ( eg: The travel time from Bhusaval to Burhanpur is under 1 hr and it took us more than 4 hrs on account of signal clearances )

On the lighter side of the train journey - the outside heat was pumped right inside our coach S1 as a heated debate between the ladies and gents ensued on the motion 'bazaar ni theli mardo ne nahi pan bayro ne sobhe !!’ In spite of our having a very articulate and knowledgeable Bhai Mudar on our side, the ladies vociferously defeated the motion, as I sulked at the thought, of having to continue to carry the bazaar thela till eternity !!

Another debate on the motion that - ‘ Islamic ladies of yore were more progressive and confident of themselves, as they allowed their husbands to have more than one wife, as per the shariat laws’ also was defeated.

In exasperation I managed to salvage some gents pride by repeating loudly the kalema’at nooraniyah of Aqa Moula (TUS) ‘ bayro ma vakas hoi cheh ! But to no avail, we had to accept defeat, much to my own relief, as I know how difficult it is to manage one in these depressing times!!!

Here I would like to make a special mention of Mulla Shabbirbhai Deesawala, whose kidney problem requires twice weekly dialysis. He was on the train with us and was in charge of setting up the special menu and cooking supervision. He has been serving the community for decades, and the unbound love and affection of our Moula (TUS) and faith borne out of conviction, that nothing untoward will happen, made him undertake the journey.

Special arrangement were made for his dialysis at Saifee Hospital when we were in Mumbai for a day. He returned with us, and believe me, he was looking more robust and energetic, when he alighted out of the train, carrying a box of Alphanso, as compared to myself, looking all tired and haggard !! 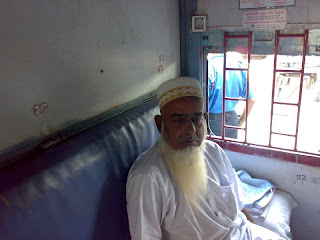 I salute you Sir !!! You are an example and an inspiration.

At Burhanpur we were served breakfast immediately on arrival, and allotted comfortable rooms. Calcutta mumineen hosted the Darees, there after we went for ziyarat, followed by Zohar/Asr namaz, mata’m majlis, salavat zaman and finally afternoon siesta.

At 5.30 in the evening we again assembled in roza mubaraka sehan, and majlis, salaam, marsiya and madeh recitation culminated in purjosh Mata’m, followed by ziyarat and Magrib/Isha namaz.

After partaking salavat jaman we headed to the Station and were on our way to Mumbai in the special train, known as ‘ Bharat Darshan’

It was all excitement and anticipation as we reached Mumbai, as usual, late by 4 hrs than scheduled. The waiting buses took us directly to Rozat Tahera, where we performed ziyarat and purjosh Mata’m, and the waiting buses, took us to Saifee Mahal.

After Darees we assembled below the gurfa mubaraka all exited and in anticipation, when Shz: Huzaifabhai Saheb (DM) did arz in Hazarat Aliyah Imamiyah on our behalf, and we were blessed with the Doa Mubarak of our beloved Aqa Moula (TUS)

With heavy hearts of parting and with doa on each and every ones lips that “Moula aapna deedar ni Eid shitabi thai’ we boarded our respective buses. Lunch packets were served

After ziyarat at Naryalwadi and Sakina bhen Saheba, and tour of the terrorist attacked Taj Hotel,we arrived once again at Rozat Tahera for ziyarat and Magrib /Isha namaz.

For making it a most memorable journey I am deeply indebted to :

Janab Amil Saheb Yunusbhai Saheb Zainuddin (DS) who conceived the idea, motivated and with his raza and doa mubarak, it was made possible. He traveled with his family, and set an example of leadership.

Sk: Saifuddin bhai Rangwala who arranged with the Indian Railways, for the train booking.

Burhani Volunteers who did a very commendable khidmat, right form the start, when the idea was first mooted. The dedicated band amongst them, spared no efforts, worked selflessly, registering names, motivating mumineen, ticket issue and all arrangements, pertaining to the journey.

It was simply because of their effort and zeal, that we mumineen for the first time in the history of Indian Railways, were served meals in the train in ‘ Thals’ ( 40 thals were carried in the train) meals cooked and served ‘our style’ which made a good impression on the Railway officials and staff accompanying us on the train.

Zakireen who were traveling and during the journey recited Marasiya, Madeh, Noha, etc: as arrangements were made in each coach for relay. Their recitations, evoked feelings of love and affection for our beloved Aqa Moula (TUS) as the train carried us, our feelings, our doa for shifa e kulli and umre darazi - ta - kiyamat of our Moula (TUS)

All Mumineen who were fortunae to travel by this special train.

NOTE:
My young friend and photographer, Bhai Abdulkader. who was with us , is presently filming wild life in Bandavagarh National Park. My next post will carry only photographs and video of the memorable train journey. Insa Allah.

It was truly an excellent journey Physically. But it was an excercise in spirituality which was rightly proven by an inspired Shabbirbhai Deesawala on dialysis!! We pray from our hearts that he may be restored with his two kidneys quickly so that he will not have to undergo this torturous dialysis with of course Aqa Maula's Dua Mubarak.