The lowly hand rickshaw finds a pride of place 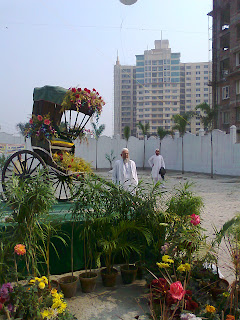 The hand rickshaw has been an integral part of public transport in Kolkata - The City of Joy since late 19th Century. It finds a pride of place in the newly built Al - Masjid ul Burhani complex, lovingly decorated and lighted up and in front of Haveli Mubarak, so that Aqa Moula (TUS) when giving deedar mubarak can also see it.

It is most appropriate and symbolic, as the hand rickshaw was first introduced by Chinese traders, primarily to carry goods. The area famously known as CHINA TOWN where there were many tanneries, is in the vicinity of Topsia, where the new Maajid has been built.

With the passage of time, the British Rulers made the hand drawn rickshaws, as a means of cheap public transport, which was widely used particularly by ladies. My mother used to tell us, that they were treated regally by the rickshaw pullers, whenever, they ventured out. As they came out of the building, the rickshaw puller would stop everyone with a flourish of his hand,so that no gent crosses their path. Once they are comfortably seated, a pardah made of canvas, would be dropped, and with the brass bell tinkling merrily, they would be carried regally to their destination.

With the passage of time, however, many thought it is degrading, and inhuman. However, from the point of view of rickshaw pullers, who mostly hail from the neigh neighboring states of Bihar and Jharkand, it is their means of livelihood.

Prior to 1990, there were about 10,000 rickshaws providing livelihood to around 18,000 rickshaw pullers. In the year 1996 the State Government tried to lure the rickshaw pullers with the version of golden handshake, offering a princely Rs: 12,000/- for surrendering their rickshaw. surprise of surprise - not a single person accepted the amount - five times the cost of rickshaw.

'We work, we do not steal. This is no indignity to me. It is a decent way of earning a living' says Mohammad Israel, who has been pulling the rickshaw for past 40 years. Another hard working rickshaw puller feels contented that it has given him everything in life - a wife, two sons in his village.

As I was collecting the above facts, my mind wandered to the daily news reports of crores of financial scams perpetuated by our powerful politicians and bureaucrats. the lowly hand rickshaw - the symbol of hard and honest work is most deserving symbol of The City Of Joy, finding a pride of place just across the Haveli Mubarak.

I recall my self getting the sharaf of pulling Aqa Moula's rickshaw on several occasions, during his kayam shareef in the city. I hope some one does have those memorable pictures, if some one has it, I would be please, if the same is forwarded, so that I can post it on this blog. 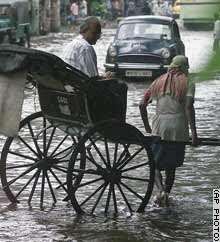 During the recent years, the hand pulled rickshaws have dwindled in numbers, and only ply in the by lanes of the city. However, they prove indispensable, when during the rains, the streets get flooded, and cars, auto rickshaws and all other forms of modern transport, come to a halt. It is the lowly rickshaw that merrily trudges on, and their riders reach their destination, in style.

This tribute to the rickshaw and the hard working rickshaw pullers has been written by me during the kayam shareef of our beloved Aqa Moula (TUS) We mumineen of Kolkata fervently hope and pray that may our Moula (TUS) stay in our CITY OF JOY for a very long long time.

I had made a suggestion for a tram car ride, another one of its kind mode of transport, that is unique to our city. Given the time we now have, the water body facing the Haveli Mubarak can be dotted with artistic pandal structures, lighted up with the world renowned Chandernagore lighting, depicting our rich Fatemi Heritage.

As usual Asgar Uncle ... your Mints are truly refreshing.

And with Aqa Maula (TUS) in our city and with his nawazish .. keep 'minting'.

Mubarak to you for current Tashrif Aawri in "The City of Joy". May you have a joyful and fruitful time.....