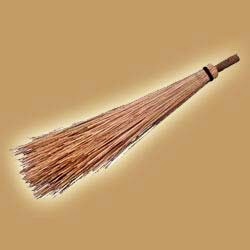 In the Swachh Bharat Abhiyan the lowly broom stick in all shapes and sizes has found a pride of place and has become the toast of the country. Since 2nd October thousands upon thousand of pictures and videos has been uploaded and doing rounds in cyber space, wherein the wielding broom sticks stand out.

Individuals and Organizations have made efforts to come out and be seen, but the task ahead is not easy and the lowly broom sticks are up and against a formidable foe, which requires a sustained herculean effort and focus all year round.

The lowly broom sticks which we have proudly wielded is pitted against the following reality :

In our cities and towns nearly one third of the garbage is not collected at all - it is just left to rot away and streets and alleys. So in a year,  more than 14 million tons of garbage is left to rot in urban Indian streets.

The 70 % that is collected is taken and dumped either in landfills or just any open spaces available outside the main habitation. Only about 18 % of collected garbage is treated for recycle or made fuel.

The other dimension of sanitation for which our wielding broom sticks is no match is sewage or waste water disposal.

More than 26 billion litres is getting dumped into our streams and rivers daily. In the four metros out of 16 billions litres of sewage generated per day only 8 billions get treated.

The above are the hard facts and our wielding broom sticks are no match. Now that photos and videos have been shared, we have to turn our attention and focus on the real issues.

It is not that Swachh Bharat is merely a dream, it is viable and achievable and many countries with the help of modern low cost waste management technologies have made a noticeable change in the living conditions of their citizens and the environment of their country.

We have become selfish and self centred - and this is a real issue. People spend lakhs on their homes and offices, but have scant regard, when it comes to taking care of their immediate neighborhood.

Now that the wielding  broom sticks have been captured in pictures and videos, and confined in a corner and will soon be forgotten, I am sharing with readers some insights received from science of epigenetics.

I fervently hope that after reading it, you will be motivated to make the Swachh Bharat Abhiyan a sustained and life long effort, as we all are the ones who will be benefited.

QUOTE:  'While the media made big hoopla over the discovery of the BRCA 1 & 2 breast cancer genes, they failed to emphasize that 95 % of breast cancers are not due to inherited genes. The malignancies in a significant number of cancer patients are derived from environmentally induced epigenetic alterations and not defective genes.  ( Book Ref: The Biology of Belief - Dr. Bruce Lipton)

Now on reading this, it will surely make you run in the corner, pick up the broom stick and wield it all year round. ( Not in the literal sense, but it will motivate you to spend your time, your resource, more important your expertise, in helping to keep the environment clean ) Environment is an all encompassing term. It is indeed in the best interest of each and every one of us. This is just but one example.

Now let me share with readers another insight, as to why SBA will make you into a better person, a complete full filled person.

The following excerpts are taken from a recent article - ' Two kinds of Happiness ( One is Bad for You) by Deepak Chopra MD.

Read on : ' Happiness results in two types of well being. One is ' eudaimonic well being'  ( eudaimon in Greek means happiness) this happiness derived well being is a direct result of life lived with a purpose and meaning, and shows positive results in our immune cells.

Which,  in the context of my 'write up' simply put - wielding the broom stick all year round, will make your cells - there are approx: 37 trillion cells in your body more healthy  !! So SBA  is in our personal interest.

Read on : ' On the other hand 'hedonic well being' is the result of happiness, which is dependant on consumerism, and burst of pleasure arising out from acquiring.

Now here comes the bouncer :  Hedonic well being ( hedon in Greek means pleasure) fared worse than unhappy people in the genetic expression of their immune cells, showing tendency towards inflammation and less ability to fight viruses.

Both type of happiness have the same high level of positive emotion, but one is good for you, and the other is not. It is upto us to decide. We can fool ourselves that we are happy, but our genes know better.

Inflammation of cells has been connected with a wide range of disorders from heart disease to cancer and now is leading suspect of chronic illness in general.

The Spiritual path has for ages described two paths of well being - the path of wisdom and the path of pleasure.

So I conclude by saying SWACHH BHARAT ABHIYAN has provided us an option  to choose a holistic well being path  for our selves, our family and the citizens of India. JAI HIND !!

Thanks. Informative and thought provoking call to action. Let's hope we can all find our own small ways to engage and do something for our world.

Nice article, informative.
Authority has to provide platform of easy collection n disposal and citizen will stick to rules or maintaining the city clean. Together we can do it.

This abhiyan points towards an opportunity for an industry to come up for entire project providing efficient technology, construction material and technology to fulfil the goal at national level in rural urban and rarest areas of our country.
Our entrepreneurs should rise and
implement.

Govt. needs to activate its own various agencies which are funded by world bank and its ilk. They should be made more efficient with a punishment clause. it is taxpayer's money which is collected as 'safai vero' by various municipalities along with house tax. If they function well what is the need to be symbolic about safai abhiyan. GOVT. SHOULD NOT BE ALLOWED TO BUNK ITS RESPONSIBILITIES. from: mohammedi saifuddin rangoonwala, kolkata