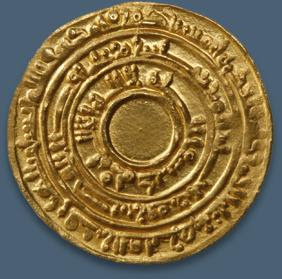 Gold coin of the period of Imam Aziz (SA) 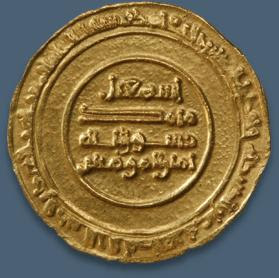 Gold coin of the period of Imam Mansoor (SA) 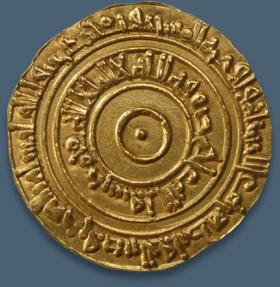 Gold coin of the period of Imam Muizz (SA)


Ack: Fatimid Coins at the David Museum in Copenhagen


My niyat behind writing this 'post' is that may some enterprising Travel Agency be motivated to organize a Heritage Tour of North African countries, through which Imam Mahdi (SA) traveled and founded Mahdiyah, heralding the golden epoch of 'zuhur' in Magrib, as prophesied by Nabi (SA)

AKHBAR IS ANW'AR - let me share with you the historical aspects preceding the 'zuhur' of Imam Mahdi (SA) taken from my reading of the Book entitled ' The Empire of the Mahdi - Rise of the Fatimids by Heinz Halm - translated from German into English by Michael Bonner.

After the death of Dai Abdullah the elder known in history as Khalf ( hallaj al qutn - cotton carder) the occupation he undertook as the cover of his missionary activities his son Dai Ahmmad carried on with the mission.

The community of Rayy became the most important and active cell of Ismaili Dawa in northern Iran.

At the same time or thereabout Ismaili missionary activities had been underway in the rural areas surrounding Kufa on the banks of the Euphrates.

Another important and lasting area of missionary activities originated in Yemen. The Dai who founded the Yemini Ismaili community hailed from Iraq. In history he is known as Ibn Hawshab ( Dai Abul Qasim al Hasan bin Farah bin Hawshab, known to later Fatimid Historiography as 'Mansoor al Yemen' ( the victorious of Yemen)

In his book - 'Sirat Ibn Hawshab' the Dai Abul Qasim narrates how he overcame the crisis of faith, which preoccupied him like many other (Twelver Shi'ites) followers of Musa Al Kazim.

The last generally recognized supreme head of the Shi'ites, (Twelver Shi'ites) their eleventh Imam died in 874 (260H) leaving no mail heirs. The belief that there was a hidden Twelfth Imam, had not taken hold, and aroused doubts in many Shi'ite minds.

In such a mental state according to Dai Abul Qasim, he was sitting on the banks of Euphrates ( furat) and was reciting from Surah al Khaif, he saw a spiritually radiant, magnificent old man approaching the river bank accompanied by another man. Ibn Hawshab was mesmerized and stopped reciting.

Than a young lad came sprinting towards him. Ibn Hawshab asked - ' who are you my son' He answered ' a descendant of al- Husayn (SA)' At the mention of al-Husyn the eyes of Ibn Hawshab overflowed with tears. He said ' You are dearer to me than my father, you are the son of the Resplendent One, who was stained with blood, who was prevented from drinking water'

The true meaning of the verse of Surah from al Khaif was explained to him by the spiritually radiant man sitting a little distance away, when Ibn Hawsab was summoned in his presence.

This is how Ibn Hawsab became Dai Abul Qasim.

The Ismaili mission in Yemen

Shortly thereafter in the beginning of June 881 (267H) Dai Abul Qasim and Dai Ali bin al-Fadl set out and near Kufa joined the pilgrim caravan. After Haj with the home bound Yeminite pilgrims, they reached the port city of Aden by way of San'a and al-Junad.

He disguised him self as the trader of cotton and started his mission, and the first converts were the clan of Banu Musa, who came from the village of Adan La'a in the Wadi of La'a. In the year 269H (883) he moved to Adan La'a, and from there, the dawa spread fast and openly and the permission to wage war was granted.

A fortress was built at Abr Mahram, two other fortresses were also won. Bayt Fa'iz visible from far and dominating the entire Miswar region and Bayt Rayb - a fortress on sheer precipice, which had no entrance than a single gate.

From this controlling position based on the three impregnable fortresses the Dai could easily rule and control the surrounding valley.

The Ismaili Mission in Iraq

The over jealous activities of the sons of Zakaroye led to much bloodshed. They purported to spread Ismaili Dawah. Yahya bin Zakoraye (the man with she camel)laid a seize to Damascus from early December 902 to early 903.

Al Husain bin Zakoraye ( the man with a birthmark - the sahib al Sahma) was misguided and his activities led Imam Mahdi (SA) to leave Salmaya. The Imam hurriedly traveled to Hims, from there to Tripoli, spending a day there and from there to al Ramala and finally reaching Egypt, where he remained for a year.

The Ismaili Mission in North Afrikiya :

In February 893 (278 H) Dai Abu Abdullah referred to as - al Shi'i, set out on the Haj pilgrimage from Kufa and during Haj met and befriended Berbers of the Kutama from the region of Qustantia (Constantine in present day Algeria)

The Dai won of over the Berbers trust and esteem and reached Egypt in their company. There is a detail verbatim and interesting record still in existence of the conversation Dai Abu Abdullah had with the Kutama Berbers, from whom he found out all details of their community, their numerical strength, their political allegiance to the Amir of Qayrawan.

Without disclosing his purpose and his mission, he found out from the Kutama, that the Berber community enjoyed great independence, and their submission to the Aghlabid Amir was of token nature.

On reaching Egypt, as was secretly wished by Dai Abu Abdullah, the Shi'ite Kutama pressed upon the Dai to accompany them to their country and teach them.

The caravan went through Libyan Tripoli and the oases of the Chottel Djerid in Southern Tunisia, before arriving at Sujmar in present day Algeria. Here the Dai recruited two new novices.

In early June 893 Dai Abu Abdullah - the Shi'i entered the territory of the Kutama - the present day Lesser Kabylia. He chose to live in the small town of Ikjan, in the vicinity of the ancient Roman city of Mila, the dwelling place of Banu Saktan, to whom the Shi'ite pilgrims belonged. Along with the Dai, were three Ismaili followers of Yemen.

The Theocratic State of Tazut was organized by Dai Abu Abdullah. He divided the Kutama into seven parts, and raised an army out of each seventh. He sent a Dai to each village. He called the leaders and dais 'elders' (mashayikh) even though many of them were young. The booty remained in their hands until the time Imam Mahdi (SA) appeared. Nonetheless, they did this, as history records show, with reluctance and grumbling, for ever in the course of time, they had grown accustomed to power and revenue, and wrongly assumed that, it would remain ever that way.

Majalis al hikmah were held daily at Qayrawan by Dai Abu Abdullah and other Dais, in which the participation of the women is particularly emphasized. Many abhorrent social practices of the Kutama were thus discontinued.

When Dai Abu Abdullah struck his first serious blow after mobilizing the Kutama against the Aghlabid rule in 902 (289) Imam Mahdi (SA) was in Salamya. It was around the same time the sons of Zakaroye, were mobilizing the Bedouin tribes, against Damascus.

Thus Ikjan the former refuge of the Dai became once again the center of Dawa. The forces of Kutama regrouped and subsequently one by one the Forts of Baghaya, Qalama (Calama) Buna (Bone - Annaba) fell in the hands of the Fatimids. The strong fortress of Maydara ( present day Haydra ) in Southern Tunisia capitulated without struggle.

The Aghlabid Amir Ziyadat Allah after his propaganda and largess failed to mobilize his troops and subjects against the Fatimids, fled from Raqqada.

Thus on 25th March 909 (Rajab 296H) Saturday the Dai Abu Abdullah - the Shi'i entered in victory to Raqqada, and awaited the arrival of Imam Mahdi (SA)

As Dai Abu Abdullah was consolidating his position in the Kutama country of Western Sahara, Imam Mahdi (SA) around January 905 (Rabi ul Awwal 292H) left Egypt and in Libiyan Tripoli he waited for his slave Jafar, to return from Salmaya, who had gone there to retrieve the treasure buried in the ruins of Imam Mahdi's house.

Halfway between Alexandria and Cejrenaica the caravan of Imam Mahdi (SA) was attacked by Berber robbers. In the fight Abul Abbas, the brother of Dai Abu Abdullah, was wounded in the face. Imam Mahdi (SA) lost some of his possessions, including the sorely missed Books with the wise saying of the Imams (SA) the religious literature. Afterward these books were returned miraculously to his possession.

From Tripoli Abul Abbas was sent forward to Qayrawan, where his identity was compromised and he was made a prisoner. So Imam Mahdi (SA) had to change plans. As soon as his gulam Jafar arrived from Salmaya, Imam Mahdi (SA) joined the caravan from Tripoli to far West.

He was accompanied only with Imam Kaim (SA) and the gulam Jafar, the other members of his household did not join him, until afterward.

The caravan first went to Qastiliya - the oasis region of the salt pan of the Chett el Djerid (Shatt al Jarid) in the south of present day Tunisia.

There they made a two day halt at Tuzur ( now Tozeur) to celebrate Eid on 6th Aug: 905 (1st Shawwal 292 H) From Tozeur through the mountain massif of the Awras (Aures) they reached the oasis Biskara (the Roman Vescera)

Traveling through the monotonous high plain of Central Algeria, by way of Qashliya, they arrived at SIJILMASA in present day Morocco. Here they rented a nice house from Abu Habasha. Three months later, they were joined by dependents and family members.

The ruins of Sijilmasa lie right at present day Rissani on both side of the road to Erfoud.

Much effort and research will be needed if a heritage trip starting from Al Qahera is to be organized. Are young enthusiastic mumineen bikers willing to give the project a thought. Alhamdolillah !

Me too is very interesting in this sort of stuff of Dawat Heritage and our religious links...
I too wish i someday go to North African nations to witness and research such things and benefit myself and others...