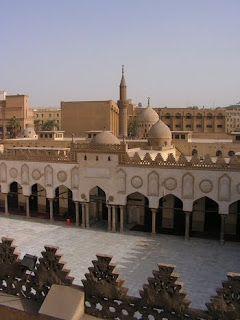 The Zantara tribe of the Berbers formented trouble in North Africa. Bulkin managed to suppress the revolt, however, after his death his son Mansoor was not successful, and could not control fully.

Imam al - Aziz (SA) died at Bilbays, while on his way to meet the Byzantine forces in Syria. He died on 25th Ramadan 386 A.H., (Dawat records the death on 12th Ramadan and was buried in Al- Kahira.)

On his death bed he called his Treasurer Barjuwani, Qadi Muhammad bin Numan and Amir - Hasan bin Ammar and entrusted the guardianship on the next Imam Mowlana al_Hakim (SA) who was 11 years old.

Barjuwani who was in charge of Turkish Guards, was the Treasurer and the tutor of Imam al- Hakim (S.A.)

Ibn Ammar belonged to the Kutama Berber tribe and held control over Berber Guards. Both Barjuwani and Ibn Ammar were trying to depose each other, and in the struggle both were killed.

Imam al- Hakim (S.A.) boldly acknowledged responsibility, at the age of 15 and began to take direct interest in the affairs of the State. He appointed Husain son of Sy. Qaid Jawhar as the new Vazir, but was later deposed from his position at the time of Abu Rakwa's revolt.

Abu Rakwa ( Walid bin Hisham) was the Ummayad prince from Spain, who fomented trouble in North Africa with the help of the Zanata tribe, and he came close to Alexandria, on the bank of the Nile, but was defeated by the Imam's army led by Fadl bin Hasan bin Saleh.

A huge canal was built at Alexandria. An Observatory at Qarafa, where the famous astronomer Ibn Yusuf prepared the astronomical tables.

The famous scientist and engineer Ibn Haytham was invited to Cairo personally by Imam Hakim (SA) When he approached the limits of Cairo, Imam Hakim (S.A.) personally came out to receive him.

He took up residence in Jamia al - Azhar, wrote many books and died in 430 A.H.

Abul Fadl Jafar, a blind scholar of grammar and lexicography, received the honorific 'alim al-ulama (scholar of the scholars)

Syedna Kirmani came from Iraq after the revolt of Abu Rakwa to strengthen the Dawah under the guidance of Imam (SA) He worked under KHAGIN who was Dai duat.


In the year 411 A.H. (27th Shawwal) Imam al-Hakim (S.A.) was surrounded by assassins on Mount Muquttam, where he used to visit frequently for meditation and observation of Stars. He was assassinated. One of the assassin was caught and brought before Imam al - Zahir (S.A.) along with the blood stained shirt of Imam (S.A.) in the year 415 A.H.

Many malicious stories of the character of Imam al-Hakim (S.A.) were spread by later Christian historians, which were reproduced by many Muslim writers, hostile to the Ismaili Dawah.

The reign of Imam Hakim (S.A.) was intensely personal, direct and broadly popular. He persistently tried to correct and ameliorate the social and economic life. In so doing the rich and elite class , often seemed to particularly suffer, from his wrath and disdain.

Tall, fair and strong with sparkling blue eyes and grave face. He had a towering personality, which imposed a stamp of a genius on every person he came across. He was a brave, generous. learned and just ruler. Imam Hakim (SA) reign was marked by revolts, scarcity of rains, famine and plague. However, he managed to maintain his authority through all these difficult times.

NOTE: I have dwelt in length on the reign of Imam Hakim (S.A.) and there is a purpose. Historians have tried to malign his character and reign for reasons, which now are coming to light.

'Until recently the Ismailis (we are known as Tayyebi a part of Ismailis) were studies and judged almost exclusively on the basis of the evidence collected and fabricated by their enemies, including the bulk of the medieval historiographers , who were hostile, towards the Shi'is in general and the Ismailis among them in particular.... As a result a 'black legend' was gradually developed and put into circulation, in the Muslim world to discredit the Ismailis and their interpretation of Islam )

The christian Crusaders and their occidental chorinclers, who remained completely ignorant of Islam and its internal divisions, determined their own myths of Ismailis, which came to be accepted in the West as true description of the Ismaili Teachings and practices.

Modern orientalist, too, have studied the Ismailis on the basis of hostile sources and fanciful occidental accounts of the medieval times.

It is heartening to note, that in this epoch Burhani Daur, historians and academics are trying to 'right the wrong' perpetrated in the past centuries by vested and hostile section, particularly against the Fatimids.