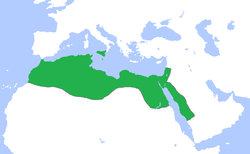 
Continuing from the earlier post where we came to know that Dai Abdullah - the Shii entered in victory to Raqqada and awaited the arrival of Imam Mahdi (SA) who was staying at Sijilmasa.

Finally Imam Mahdi (SA) established himself as the first Fatemi Caliph at Raqqada in 297 A.H., and the Glorious Fatimid Era took firm root in Northern Africa. I share with readers the Time Line, the principal personalities, and their services, some major events in the establishment of the Fatimid Empire.

This post is based on my reading from the Book :- HISTORY OF THE ISMAILI IMAMS - TARIKH E IMAMAT by Al Waez Hasan Husyn Nazarali.

On the death of Imam Husain al Mastoor (SA) at Askar Mukarram in 268 A.H. he became Imam at the age of 8 years in Salamiya. He remained in Salamiya in the guise of a Hashimid merchant, and maintained a good relation with the local Governor.

In 297 A.H., as stated above he finally established himself in Raqqada as the 1st Fatimid Caliph. He bought the island of Sicily under his control and founded new towns of Mahdiya and Mohammadiyah.

The Dawah in India : The Dawah began during the reign of Imam Mahdi (SA) Dai Ibn Hawshab, sent his nephew Dai al Haytham from Yemen to Sind. From Sind it spread to Multan and other parts of North India and Gujrat.

Da'aim al Islam - the most exhaustive exposition of Fatimid Jurisprudence, took nearly 30 years to complete. It was completed in the reign of Imam al- Muizz (S.A.)

Imam Qaim (S.A.) died during Abu Yazid's siege on Mehdiya on 13th Shawwal 334 A.H. at the age of 59 years. The news of Imam's death was kept a secret until the revolt of Abu Yazid was over.

His entire upbringing was in North Africa amid the atmosphere of battles and revolts, which helped to develop a military spirit and discipline.

He successfully suppressed the revolt of Abu Yazid, who was defeated, taken prisoner, and died in prison in 336 A.H. Abu Yazid was a Kharjide and belonged to the rival Zantara Berber tribe who opposed the Kutama tribe, which supported the Imam.

He succeeded to the Imamate on 28th Shawwal 341 A.H. at the age of 22 years. He is said to have known 7 languages, among them Nubian, Latin, Spanish and Slavonic.

Syedna Qaid Jawhar left Mehdiya for the conquest of Egypt in 357 A.H. The first khutba in the name of Imam Muizz (S.A.) was read by Sy. Qaid Jawhar at Fustat on 18th Shaban 358 A.H.

An interesting fact at the time of construction of Cairo.

The building of the new town started at a time, which the astrologers thought was inauspicious, because it was governed by the planet al- Kahir (Mars) The city was thus named after the planet al- Kahira. (We mumineen know that Sy. Qaid Jawhar had taken Imam's raza and doa, so the astrological influence did not matter in the least)

Sy. Qaid Jawhar personally supervised the construction of Al- Azhar Masjid. In the time of Imam Al- Aziz (S.A.) he built a huge library and a University, which at present day, is the oldest existing University in the World.

Imam (S.A.) started his journey towards Sardinia, he regulated the affairs of Sardinia and Sicily and then went to Tripoli, from here he proceeded to Barqa, on the borders of Egypt.

Imam (S.A.) entered the city on 7th Ramadan 362 A.H. Immediately Imam (S.A.) took over the reign of the government.

Sy. Qaid Jawhar became the Chief of the Army. Sy. Qaid Jawhar originally a Sicilian, was brought in the service of Imam Muizz (S.A.) as a young slave. By his suppression of revolts in North Africa, he attai9ned high office. He remained Commander in Chief, till his death in 381 A.H. during the reign of Imam Aziz (S.A.)

Yakub bin Killis was appointed as the Vazir. Yakub bin Killis by birth was a Jew and was born in Baghdad in 318 A.H. (930) At a young age he came with his father to Egypt. He was very intelligent, hard working and honest, and rose to prominence in the court of Kafur.

Name of some of the Administrative Departments in the reign of Imam Muizz (S.A.)

The Mahtasib ( anti - corruption Officer) under the office of Sy. Qadi al - Numan

The Court of Mazalim' ( special court set up against the officials of the administration) under the office of Sy. Qadi al- Numan.

Qaid al Qawad (The Admiral of the Fatimid Fleet)

The libraries in Mansooriya and Cairo became famous for their rich treasure of books on almost any science. Learned people were given all the encouragement to use these libraries. Imam Muizz (SA) him self spent much time, in the libraries reading.

The news of Imam's death was not announced for eight months. This was the usual practice adopted, so that the far flung areas of the Empire, could be bought fully under Administrative control.