In continuation of my earlier blog entitled ' Isha'raats in my Moula's kalaam and salaam' and primarily upon receiving the baraka'ts emanating from 'ahyah of Laylatul Qdr - the deedar sharaf (live video relay) and the spiritual blessings from the tilawat of Munjat Sharifa ' Adooka Adooka Zalzala'li' - 1431 H I am making a honest attempt to conceptualize and understand the 'isha'raat' and hidden haqaiq, alluded to in the Abya't Sharifa 17

With the beginning of Al- Multaqa in 1399 H and the historic restoration of JAMIA UL ANWAR the onset of the 15th Century Hijra has witnessed unprecedented rise in the 'community consciousness' and understanding of mumineen. It is unfolding in quantum leaps of creative emergence. Just look back a few decades and one will surely realize, what a transformation it has been.

In this BURHANI DAUR a glorious epoch in the resplendent Fatemi history, the brilliance of understanding the 'isha'raats' and comprehending the haqaiq - the hidden truths has permeated to all 'holons' of the community. There has been an exponential growth.

I have used the term 'holon' as it is most appropriate and if readers have read my earlier blog
http://mindmints.blogspot.com/2010/06/brief-history-of-everything-ken-wilber.html
the meaning and significance of what I want convey will be better understood.

A layman like me with limited knowledge and grasping power, also receives the baraka't of making an attempt to understand the hidden haqaiq and isha'raats. It is only because of my Moula's karam and ehsaan.

This hidayat of Muqqadas Taher Saifuddin Moula (RA) has flowered in full bloom, resplendent in all hues- it is spring time of community consciousness. Awareness and understanding permeating all the strata of mumineen society.

In the context of the above, let me share with you my 'taffakur' of Abya't Sharifa 15 and 16. As the subject of this blog is - isha'raats' I will not take recourse to explain in detail, as I am confident, that by merely making pointed references, the readers will understand and more important, they will be adding to the understanding by their own reflections and tafaakur.

So if you all start sharing your thoughts, this may well turn out to be a evolving blog - spiritual transcendence.

I have incorporated my taffakur of Abya't Sahrifa 15 and 16 in the image below. I am indebted to my young friend Bhai Murtaza Attari for giving his time and expertise, and helping me translate my concepts into computer graphic design. 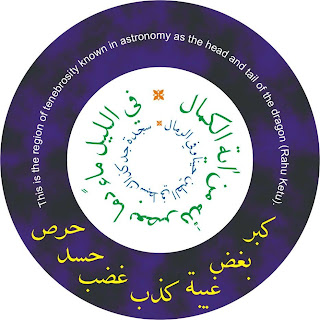 Now on tilawat of the Abya't Sharifa 15 and 16 again and again I began to reflect.
In Abya't sharifa 15 Aqa Moula (TUS) emotes on two 'sujoods' the one by Rasulallah (SA) soft mud (water and mud) and the other by his grandson Imam Husain (SA) on the dry burning sands.

In Abya't Sharifa 16 the zikr of sujood by Nabi (SA) on Laylatul Qdr in water and the sujood of Imam Husain (SA) in blood on Ashura.

In Abya't sharifa 17 Aqa Moula (TUS) alludes to the hidden haqaiq, that both the sujood of Nabi (SA) in muddy water and that of Imam Husain (SA) in blood soaked burning sand, will for ever protect mumineen till day of Qayamat from enemies of Deen, at the same time both the 'sujoods' will for ever quench the thirst of the true seekers of Ilm and all those who are seeking emancipation from this earthly bondage.

If you study the image, what is the first thing that strikes you. The white circle represents an un impregnable fortress (hisne haseen) that keeps the mumineen protected from the region of tenbrosity - a region of darkness and gloom, a region of malefic ether causing disaster, harm and evil in human society. All evil thoughts and deeds, all that is negative and restraining to the ascent of human mind and soul, find refuge in this dark space of microscopic vibration.

The white space provides immunity and protection from the egocentric tendencies that tend to divide us and make us selfish and possessive. The sujood of Raulallah (SA) on Laylatul Qdr and the sujood of Imam Husain (SA) on the day of Ashura has manifested into a sheath (Armour) at the same time an all embracing, permeating, enfolding positive spiritual force, a field of subtle energy, offering protection and at the same time, energizing the mumineen 'nafs' to attain higher and subtler hierarchies.

On my reflecting on the sujood of Rasuallah (SA) in soft mud on the Night of Qdr.

Mud and water reminds of 'ibda' - creation. Surah Al-A'raf (Ayah 12 ending) ' and him (Adam) you created from clay'

So the sojood of Rasulallah (SA) on Laylatul Qdr signifies to me the creation of the protective sheath - the first evolving - and the sheath goes on to become an un impregnable fortress ( hisne haseen) with the sujood of Imam Husain (SA) on the burning sands of Karbala.

Which in effect means that now there is no fear of malefic forces, a mumin comes under the protective sheath.

My reflections on sujood of Rasulallah (SA) in water and sujood of Imam Husain (SA) in blood.

Life begins in water and blood is the life giver.

In the explanatory note in Abya't Sharifa 17 Aqa Moula (TUS) says that Awaliya Kiram sahebs have ensued that only mumineen have been blessed to receive the ma'refat (know the significance and import) of both Laylatul Qdr and Ashura.

A stanza in an elegy on Imam Husain states: Sadaa Zahra ki kehti hai Husaini Jaa'n nisaaro'n se, Hayat e javidaa'n milty hai Ashko'n ke Isharo'n se. The water which is being elaborated upon is in essence the "ashk". In a bayan it has been stated that the "ashk" which rolls out from the eyes comes from the blood. This ashk is the Isharaa of that blood which has gone into the making of it. This in fact emphatically proves that you too shed blood for Imam Husain. That is why in a bayan it is stated that a tear droped in gham e husain from your eyes entitles you to the "Ghurfat" in Jannat. We have seen Aqa Maula in that Ghurfat during his bayan. This is his ishaara - the sign indicated by him As Syedna Taher Saifuddin says in a Noha : Royee lo karbala ni balaa par ay Bhaiyo, "ghurfat" miley Jazaa ma hi dar-us-salaam n'o. Maatam karo Husain Alayhis salaam n'o. Didn't you notice Aqa maula doing maatam. A perfect tribute to Hadees of Nabi e karim Mohammed S.A. "Ma'n baqaa au abqaa au tabaaqa a'la waladal Husain wajabat lahul jannah.

Why he is doing maatam? because he is "saafenat ul jiyaad" as Al quran refers to him. It means "Bhalla Ghor'a" .A Noble horse. Aqa Maula in one his bayaan has stated that We are Safenaat ul jiyaad.That noble horse had coloured his hair with the blood of slain Imam Husain lying in the sands of Kerbala.He had seen Imam Husain's Head being severed from His body. He had seen that Imam Husain bowed down into sujood and did doa' for his doaa't kiraam which he confirmed in Lailat ul Qadr wasila:"Imam Husain remembered Syedna Taher Saifuddin and me while he conducted his last' but never the least prayer in his Sajda-e-Akhir". This is the tasavvur I would like to offer to those who are in search of it. This is a Daleel as the word "Burhanuddin" envelopes it in its very self. Al Quran superbly menifests in this ayat: "Ya ayyohan naaso qad jaa'akum burhanun min rabbekum wa anzalna elaykum noora mm mubeena".