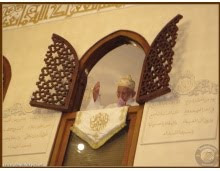 Sharing my thoughts and feelings as I witnessed the video recording of Aqa Moula (TUS)slowly appearing in the 'gurfah mubaraka' of the Evan e Jamia and in the context of the riwayat of moulana Jabir (RA) getting the sharaf of ziyarat of Rasulallah (SA) traveling from Kufa to Medina, in the 'noor' emanating from the raised finger of Moulana Ali (SA)

MOULA as I witnessed the gentle sway of your hand all around
your all pervading and spiritually enriching gaze
the jostling multitude of mumineen below
the heart rendering cries MOULA ! MOULA ! MOULA !
your becoming the object of nostalgia and desire
the ever ascending motion of raised hands and reaching out
the cascade of emotions, the flowing tears, outpouring of love
the undying desire of mumineen to be engulfed in your noorani nazar
the forceful yet controlled pendulum swings of mumineen at the far ends of the Evan
the composed, controlled grounding of the first line of sada't kiram sahebs
all gazing up in contemplation and outpouring of love .............


took me back to the beginning of the time
took me back to my fall from grace
as I fell from the celestial pleroma
engulfed in darkness, murk and gloom
as I fell and repented
I must have also looked up longingly
at Moula A'shir gazing down at me with wishful eyes
myself hurtling down, jostling amongst the fallen souls
but all the same looking up longingly
at the reassuring and ever radiant gaze of my Moula
who with the wave of his hands in salami
with no words uttered but in 'clear writing'
for me to understand and feel
says: ' I am doing the tadbeer
just keep me for ever in your heart and your gaze
I will surely bring you to me !!

You can watch the movie video by clicking on the link below. Please copy paste the link on your browser and download the video.

SEHRULLAH - THE MONTH OF SUPPLICATION

MUHARRAM epitomizes the azeem saha'dat of Imam Husain (SA) on the burning sands at Karbala. An iba'dat for the emancipation of humanity at large.

Moulana Ali (SA) saha'dat in masjid e Kufa on 19th Sehrullah while offering fazr namaz attained manifest victory, over all the evil forces, that were deterrent, for the emancipation of human souls.

Sehrullah is the month of supplication, month of roza, namaz, paying of zakat and reaching out to those in need.

One most spiritually elevating characteristic of Sehrullah is the Bihori namaz. During Sehrullah rightly so, Imam Ali Zayn al Abidin (SA) and his supplications help us in connecting with Allah. How close a mumin feels, how spiritually radiant one becomes, when the world sleeps, a mumin keeps his night vigil and recites 'Molaya Molaya...'

Imam Ali ibn al Husayn (SA) is known as Zayn al- Abidin (the ornament of the pious) and his AL -SHAFAT AL KAMILAT AL SAJADIYYA contains spiritually radiant and uplifting supplications, that helps in bringing one near and personal with his Creator. They are not, however, merely supplications, they embody comforting answers to many questions with which, man of our time are confronted. They are a balm and solace to the troubled mind and soul.

Perhaps the most eloquent testimony to his exalted position is the famous ode composed in his praise by FARAZDAQ an eminent poet of his time. In it, FARAZDAQ refers to the occasion, when the Caliph Hisham b. Abd al Malik was overshadowed, and felt slighted by the respect which the people showed towards the great grandson of Nabi (SA)

It was hajj season, when both of them were trying to reach through the crowds around Ka'ba to touch the Black Stone. The people respectfully gave way to Imam Ali Zayn al - Abidin (SA) while the Caliph struggled desperately.

This deeply offended the Caliph, and in a sarcastic tone, he inquired, who the person had been, to whom the people had shown such preference. Farazdaq who was present at the scene, thereupon immediately composed an ode and recited it, addressing himself to Hisham. Herein below are a few lines from the ode.

'It is someone whose footsteps are known by every place
And it is he who is known to the bayt (Ka'ba) in Mecca
the most frequented sanctuary;
It is he who is the son of the best of all men of Allah (Nabi - SA)
and it is he who is the most pious and devout,
the purest and most unstained
the chastest and the most righteous,
a symbol (for Islam)
This is Ali (b.al Husayn) whose parent is the Prophet
This is the son of Fatima (SA) if you do not know, who he is;
Whosoever recognizes his Allah knows also
the primacy and superiority of this man,
because the religion has reached the nations
through his House.

So this Sehrullah let us immerse ourselves in Iba'dat more so, as we mumineen are doing 'ohbat' for the 100th Milad Mubarak of our beloved Aqa Moula (TUS)
Posted by MIND MINTS at 10:43 PM 1 comment: