Ameerul Haj and his 'asa

It was a most moving 'wada' scene on the hallowed precincts of Saifee Mahal on the morning of Jumoa 27th Zilkad 1433 H ( 12th Oct:  2012) on the occasion of Milad of Syedna Taher Saifuddin Moula (RA)
when Aqa Moula (TUS) bid an emotional farewell to his A'li Qadr Mansoos - Ammerul Haj Moulaya Mufaddal Saifuddin  Saheb (TUS)

As A'li Qadr Moula repeatedly prostrated himself  in humility and shukr and as Aqa Moula (TUS) lovingly looked on, for that small gathering, who was there to witness the history in the making - it was simply heavenly and ethereal.

The poignant wada scene was narrated to me over phone by a relative, who said as Muffadal Moula slowly withdrew and those assembled conveyed Mubarakbadi, tears overwhelmed him and as he repeatedly looked back longingly at Aqa Moula (TUS). Every few steps he took forward, he turned around to look once  more, to be blessed once more with Deedar of his Naas,which may be conveying to  him a thousand things, which is beyond our comprehension.

It is beyond words to describe the emotional and spiritual bond between the most radiant Nass and his most glowing Mansoos. 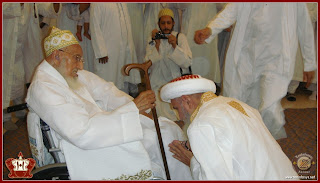 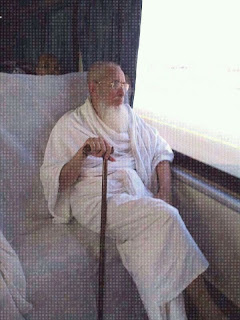 Now this hadiyah of 'asa seems to be very unique and very significant. I am unable to fathom the true significance. None the less it made me reflect. Here in this post I share my reflections, with the hope that it may also make my readers reflect and share their insight, as an act of Hamd and Shukr.

For a layman and an infirm like me - an Arabi - 'asa is merely a walking stick, to give me support - a walking aid, so that I may be able to take firm steps. However, for a Spiritual savant, an 'asa is much much more. It harbors deep connotations and meanings, which we will not be able to fathom. In this post, I merely skim the surface with my reflections. People of knowledge may be able to dive deep and gather luminous pearls of hikmaah.

'Asa is the sunnah of Ambiyaa  (AS)
It is an adornment of the pious people.
It is a weapon to vanquish the enemy.
It is also an aid for those who are weak and old.

Now my reflections. Within hours of receiving this hadiyah from beloved Aqa Moula (TUS) the latent power of the 'asa - its significance was witnessed in the bayan mubarak of A'li Qadr Mufaddal Saifuddin Moula (TUS) in Dubai . With conviction and force he threw the 'asa and it  resonated in the most powerful words. Imam Husain (SA) ni zikr ghani mohti neamat chhe .... kitna gamo Husain ni zikr thi roke chhe ..... samaj chhe ke nahi eh  logo ne ...............   Those who have been fortunate to hear the bayan will surely come to understand. I will not go into the details.

Thus the Nass Aqa Moula (TUS) has truly empowered his A'li Qadar Mansoos (TUS) by his 'asa and in the days to come I fervently hope and pray that the presence of A'li Qadr Moula (TUS) in the most revered and blessed precincts of Madina Munawwara and Makkah Moazzama - a miracle will surely unfold. The present circumstances are very difficult. A particular creed  and thought process has laid barren the fertile spiritual soil. In the pious hands of A'li Qadr Moula Mufaddal Saifuddin (TUS) the 'asa will surely work a miracle. It may take years, but the seeds will surely be sown in this mubarak safar.

For many years now Aqa Moula (TUS) and each and every mumin is yearning and pining to witness their long cherished dream :

The coming days will surely bring the good tidings. Let us all pray.