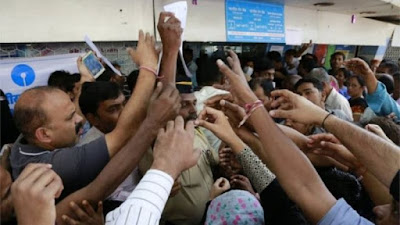 The night of 8th Nov: 2016 will be for ever etched in the hearts and the minds of Indians. For the past five days each waking and at times sleeping hours have been hijacked completely by HDN which took a royal bow at the midnight hour, and left the entire nation in a state of shock and awe.

The epoch moment is etched in my memory. On that particular night my wife Rabab had loaned me her 'telly time'  for I was interested to watch the news of the American Election on Al Jazeera. I was amused and dismayed  at the news report of Hindu outfits in India  organizing 'havans' in Mandirs and homes for the success of  Donald Trump victory. They wanted him to come to power for he had declared that he will not allow Muslims to enter the US once he assumes Presidency.

With complete blanket ban on Muslims,  the Hindus of our great country, saw  an opportunity to get more H1 - B Visas and an American Dream. I am sure within hours of PM Modi's surgical strikes, the 'havans' may have been put aside and new 'havans' for protection of wealth may have been started.

The American population in general regard Indians as a single entity. An incident after Trump victory will prove this. Manik Rathee in his twitter account states that he was stopped at a gas station by jubilant Trump supporters and told " time to get out of the country Appu" So the bigots and personal agenda driven Hindu outfits will have to work real hard with the general American population to make them aware of the difference between a Hindu and a Muslim, which they broadly classify as Asians, brown skins, which both Hindus and Muslims sadly have.

Now it was time to watch  the Hindi News 8 pm  - one full hour coverage on American Election, but the Anchor announced ' Breaking News- stand by important announcement by Prime Minster Narendra Modi. As the Nation waited including your's truly, the Anchor read the news of skirmishes at the border and the high powered Meeting the PM had with the Home Minister and three Army Chiefs. I assumed that it will have something to do with the announcement of launching massive surgical strike on Pakistan to teach them a lesson once and for all.

Who knew that the surgical strike announced  by PM Narendrabhai Modi will make our entire Nation ( 1.25 crores minus the 1 lac or thereabout  as per PM 's estimate who have amassed black money ) stand in line for days.

Today after returning from Japan he greatly appreciated the sacrifice we ordinary Indians are making on daily basis, and gave out an emotional appeal, with pregnant pauses in between, to bear for only 50 more days at the end of which he will place a ' GREAT INDIA ' in our laps, although he had failed in his Election promise to put 15 lacs in each Indians Bank Account. I for one was moved to tears by his speech.

Although having returned empty handed from Bank after having stood in line for hours, I have resolved to go each day, stand in line for my country till I receive from the Bank the allotted quota of my own money, and show exemplary sacrifice by buying the basic necessity of life and do with the amount that I hope to receive.

The News channels always play spoil sport. I was so moved by PM Modi speech and my resolve to do my bit for the Nation. My dream like reverie was shattered when all the News Channels started to broadcast the reaction to PM Modi's speech by the maverick Arwind Kejriwal. Now this fellow is a real thorn in the rapidly growing robust flesh of the BJP.

He has very simple down to earth solutions. The nail in the coffin of his reaction to PM Modi's speech was that, why make the entire Nation of 1.25 crores ( minus the 1 lac or thereabout corrupt) stand in line for days on end and suffer deprivation, why not bring to book the 600 + holders of Swiss Bank Accounts, the names and all the details are there with the Government. Why not use the Power Vacuum and flush out the dirt, at one single go. Swatch Abhiyan with broom sticks and water hoses, is good, but very laborious, and the results will take 50 days to show.

It is for this very reason I do not like Arwind Kejriwal. I would have stood in line joyfully for days on end, but after his 'spanner in the works' it will make my standing - I have to stand in line for my own money at the micro level and for good of the Nation, at the macro level - my standing in line will be less joyous, painful at times, as he has implanted doubts in my Modi enthused mind.

Readers who have been following my 'write up' will be feeling surprised by my present genre of the post. It is my surgical strike on their  Mindset.

In truth I would not have written but out of the hundreds of whatsapp messages, Face Book posts twitter and numerous news items, some really very funny, creative and informative I came across a precious gem of reflective thinking, which being a writer of Spirituality and Deen really blew me off. A great piece of reflective thinking, when everyone is busy with money (wordly) matter. It is sad that the author remains unknown, but I have said a prayer for him. Such are the people who in turbulent times, become our beacon and guiding light.

It was this niyat to publish the reflective thinking that on this Sunday evening I decided to forgo all the News, punditry, discussion, political slug fest, and dismaying reports of India standing 'in line' to share with my Readers the following reflective piece.

At the end of 50 days we will have a Better Vibrant India, I fervently hope, but honestly do not know. However, this much I know, on reading this shared gem of a piece, you will surely become a better person. Please share my post if you feel that the shared insightful piece will help your loved ones, and friends to become better person.


*7 SPIRITUAL LESSONS FROM THE CURRENCY INVALIDATION IN INDIA*

*1. Change is Sudden*⚡
Everybody is concerned about the overnight action making high value currency invalid across India. Nobody saw it coming; or was prepared; or had even any idea of its happening.

But there is something else which we know will surely come, but are not sure when, where and how -  that is death. And it will come even more stealthily than this!

We had 4 hours advance notice for this - but  in death, there will not be 4 seconds. Are we prepared for the secrecy and suddenness in Death?

We had Lakhs of Rupees in 500 and 1,000 denomination yesterday - but today they are just pieces of paper!

Similarly,  all wordly gains -  money,  wealth,  fame,  power -  not just high currency -  will all be worthless for us a second after death.

Like the ATMs and Banks are closed today,  options to do good deeds will close with death. No further good deeds can be done / notes withdrawn by us directly.

We can enjoy the assets we purchased earlier with the 500 / 1,000 currency but can't purchase any new ones now. Similarly, only the lasting assets of good deeds we created will benefit us after death -  no new goodness can then be done.

One of the purposes of the action is to deal with fake currency. After this, all fake notes will be out of the system. So will it be with ourselves and our actions...

Let us test ourselves - do we have authentic notes or fakes ones -  of success, relations, happiness, even good deeds? Is our life itself authentic or are we living a fake life in a fake world?

Big deeds run the risk of breeding pride and arrogance. The real gems are the small,  quiet, hidden, good deeds that are done with sincerity when no one is looking.

For each of your actions, you shall be questioned and your source / intention seen.

Similarly when you bring your deeds to the Creator, he will ask for your source / intentions / purpose. Did you do it to be called a generous person? Or to compete with someone? Or only for the will and happiness of God?

Only the last will be valid currency there!

A lot of people are busy worrying and planning what they can do with the invalidated currency now. But it may be too late.

Planning for the Hereafter needs to be start in the Now -  with right intention,  sincere devotion and regular action. Else it could be too late.